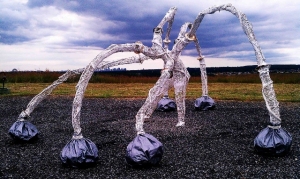 DB Lampman is known for her unusual large-scale sculptural installations, video and performance art. She received her BFA from Maryland Institute, College of Art in 1994 and her MFA from the School of Visual Arts in 1996. DB is a 2011 recipient of the Premier Grant from the Council on the Arts and Humanities for Staten Island.

In 2000, she received the Pollock-Krasner Foundation award for her installation art. Her large scale, kinetic sculptural installations, in which the sculpture or the sculptural environment reacts and responds to the viewer, have been shown at such places as the Tenement Museum in NYC, the Islip Art Museum in Long Island, and 26 Federal Plaza in downtown Manhattan. At the 2003 Kingston Sculpture Biennial, DB presented a sculptural performance entitled, “Ripe,” in which she wore an electrified steel harness covered in light bulbs. Her experimental digital video, “Home,” was an official selection of the 2003 Brooklyn International Film Festival and was shown at the Brooklyn Museum of Art and the Museo D’Arte Contemporanea Roma. Her recent projects include a multimedia performance entitled “I Am an Exponent of Myself,” featured in Forward Motion Theater’s multimedia performance art series called “ReVision 2011” at The Tank, in NYC, and “I Am Within” a sculpture and performance project at Freshkills Park, on the site of what was formerly the world’s largest landfill. DB was born in Roswell, NM, and was raised in the desert southwest. She proudly lives in Staten Island with her husband Scott Van Campen.

Staten Island MakerSpace was founded in 2013 by sculptors, DB Lampman and Scott Van Campen.  DB works in mixed mediums, and has a background in dance, performance art, and arts administration. Scott is a metalworker and in addition to making sculpture, has operated his architectural metalworking business New York Custom Fabricators in the space at 450 Front Street for the last ten years.

In October of 2012, Hurricane Sandy hit Staten Island hard, and the shop was flooded with over three feet of water.  Most of the valuable equipment was moved to higher ground, but the experience profoundly changed their perspective on how they wanted to live, work, and relate to the community. “People are always complaining that the neighborhood should be this, or that, but we decided to stop complaining and do something positive. The makerspace was an idea that we thought was feasible and needed in the community.”

A year prior to the hurricane, in September of 2011, Scott exhibited a sculpture he made in collaboration with his friend, Mark Zappasodi, called Brewing As Art at the World Maker Faire in NYC. The sculpture was a ten-gallon mobile brewing station and it won the Make Magazine Editor’s Choice award at the festival. Although Scott and DB have been makers for years, Scott’s participation in the World Maker Faire opened him up to the maker community at large and the seeds of the idea of creating a makerspace for the Staten Island community came into being.

Shortly after Hurricane Sandy, they visited the Edison Lab in West Orange, NJ.  “When we walked in, we looked at each other and said, this is what we want to do. We want to make a space for people to create, invent, collaborate, and make great things.”