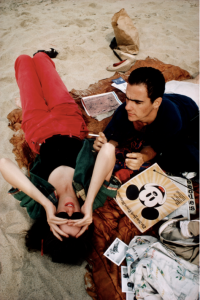 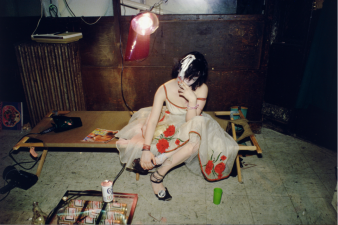 Titled after a song in Bertolt Brecht and Kurt Weill’s The Threepenny Opera, Goldin’s Ballad is itself a kind of downtown opera; its protagonists—including the artist herself—are captured in intimate moments of love and loss. They experience ecstasy and pain through sex and drug use; they revel at dance clubs and bond with their children at home; and they suffer from domestic violence and the ravages of AIDS. “The Ballad of Sexual Dependency is the diary I let people read,” Goldin wrote. “The diary is my form of control over my life. It allows me to obsessively record every detail. It enables me to remember.”
Source: MoMA

Born in Washington, D.C., in 1953, Nan Goldin was introduced to photography at the age of fifteen by a teacher who passed out Polaroid cameras to students at the progressive Satya Community School in Boston. She began taking black-and-white photographs of her friends in the transvestite community of Boston in the early 1970s and had her first solo show at Project, Inc., in Boston in 1973. She received a BFA from Tufts University in 1977 and an additional Fifth Year Certificate in 1978. As she progressed through school, she began using bright Cibachrome prints. After moving to New York, the setting for many of her most renowned photographs, she quickly became involved in the downtown New Wave scene, presenting slide shows of her images accompanied by music at punk rock venues such as the Mudd Club and later at art spaces. The ever-growing body of images she used in these slide shows formed the basis of The Ballad of Sexual Dependency (1980–86). This series, with its snapshot-style portrayals of amorous or abusive couples, drug addiction, and intimate details of the artist’s life, established Goldin as a major photographer when selections were shown at the Whitney Biennial in 1985. It was also presented at film festivals, such as the Edinburgh and Berlin festivals (1985 and 1986, respectively).

The life depicted in The Ballad of Sexual Dependency took its toll; many of the subjects of the series had died by the early 1990s, and in 1988 Goldin herself entered a rehabilitation clinic. She continued to candidly document her life, however, incorporating her hospital experiences into her work. Over time, her photographs moved from representations of destructive youthful abandon to scenes of parenthood and domesticity in increasingly international settings. In 1994 she published Tokyo Love, a series of images of Japanese youth, in collaboration with photographer Nobuyoshi Araki. Produced alongside her pictures of couples and individuals in household interiors, Goldin has also recently created luminous landscape photographs that conjure associations with German Romantics like Caspar David Friedrich.

Goldin’s numerous solo exhibitions include a mid-career retrospective at the Whitney Museum of American Art (1996) and Le Feu Follet, a traveling retrospective organized by the Centre Georges Pompidou in Paris (2001). In 1995 she made a film for the BBC, I’ll Be Your Mirror, with Edmund Coulthard and Ric Colon. Goldin has received the Englehard Award from the Institute of Contemporary Art in Boston (1986), the Photographic Book Prize of the Year from Les Rencontres d’Arles (1987), the Camera Austria Prize for Contemporary Photography (1989), the Mother Jones Documentary Photography Award (1990), the Louis Comfort Tiffany Foundation Award (1991), and the Hasselblad Award (2007). In 1991 she received a fellowship from the National Endowment for the Arts and was a DAAD artist-in-residence in Berlin. She currently lives and works in New York, Paris, and London.
Source: Guggenheim