In a production that combines spoken word, contemporary dance, video projection, classical music, R&B and jazz singing with a brooding, often joyful score, the creative team’s original story depicts five North Philadelphia teens on the run. Comprising a 15-year-old African-American girl and her self-selected “family” of four brothers – a black-identified white boy and three African-Americans, one of whom is transgender – their confrontation with a local police officer – herself a woman of color – raises timely questions of national identity (what is an American and what is America?), gender identity, the insidious nature of racism, police presence in minority neighborhoods and the violence that sometimes ensues, and the failure for some of the education system. Ultimately the work hinges on the notion of personal responsibility.

We Shall Not Be Moved grapples with its controversial themes through the tight lens of a single story: that of the five teenage runaways who style themselves the “Family Stand.” They seek refuge in a condemned house on the site of North Philadelphia’s former MOVE compound. Confronted there by Glenda, a Hispanic police officer, they draw comfort and even a degree of inspiration from the ghosts who haunt their new home, and come to consider their squatting not merely as self-preservation, but as an act of resistance.

Part of the opera’s power lies in its insistence on nuance, and refusal to provide easy answers. Thus the viewpoints represented include not only those of 15-year-old Un/Sung, the self-appointed “Harriet Tubman” of the teenage group, and of the four older boys she takes under her wing, but also of Glenda, who joined the police force as her own way out of the disenfranchised underclass. Jones elaborates:

“We really are trying to make characters that have specific locations and psyches, and we want to show those characters capable of evolving over time. Un/Sung and Glenda are both from inner-city neighborhoods, but they’ve chosen different families. Glenda has gone for the route of law and order. She believes in civilization, that there can be a right way and a wrong way, and she’s been able in some ways to transcend what she thinks is her identity as a Latina in a racist society. When we first meet her, she is not nearly as conflicted as she should be about her role in the establishment order.”

Glenda’s confrontation with the teens rises from the radioactive ashes of one of the darkest hours in the history of the City of Brotherly Love. On May 13, 1985, now more than three decades ago, Philadelphia became “The City That Bombed Itself” when local police concluded a standoff with the radical MOVE group by dropping explosives onto the organization’s row-house headquarters, starting a fire that city officials then allowed to burn. The only police aerial bombing on U.S. soil to date, this unconscionable attack killed eleven African-American MOVE members, five of whom were children, and wiped out an entire residential neighborhood, leaving more than 250 people homeless. 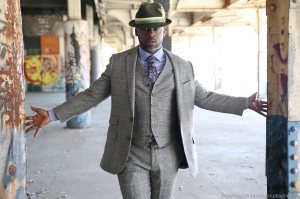 Co-commissioned and co-produced by Opera Philadelphia, The Apollo Theater, and Hackney Empire. Developed in partnership with Art Sanctuary.

Opera Philadelphia is committed to embracing innovation and developing opera for the 21st century. The company’s mission is to deliver outstanding productions of traditional and new repertoire that engage the public and propel opera forward, identify extraordinary artists,  established and emerging, and provide opportunities for them to create their most imaginative and inspired work, and to present innovative programming relevant to the multi-cultural Philadelphia region that broadens the opera audience.

Daniel Bernard Roumain’s acclaimed work as a composer and performer spans more than two decades, and has been commissioned by venerable artists and institutions worldwide. “About as omnivorous as a contemporary artist gets” (The New York Times), DBR is perhaps the only composer whoe collaborations traverse the worlds of Philip Glass, Bill T. Jones, Savion Glover and Lady Gaga.

Bill T. Jones, a multi-talented artist, choreographer, dancer, theater director and writer, has received major honors ranging from the Human Rights Campaign’s 2016 Visibility Award, 2013 National Medal of Arts to a 1994 MacArthur “Genius” Award and Kennedy Center Honors in 2010. Mr. Jones was honored with the 2014 Doris Duke Performing Artist Award, recognized as Officier de l’Ordre des Arts et des Lettres by the French government in 2010, inducted into the American Academy of Arts & Sciences in 2009 and named “An Irreplaceable Dance Treasure” by the Dance Heritage Coalition in 2000.