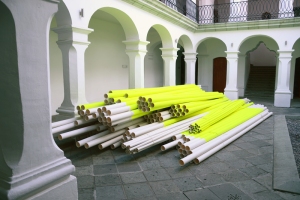 This work is extremely elegant. The scale and relationship it has to the wall and floor really activates the work. Need to come and see…

Since the early 1980s, Russell Maltz has been intensively engaged with the original parameters of Constructivist art, continually developing its legacy in his own work. He makes use of classic artistic materials and compositional patterns but also of unorthodox materials such as plywood boards, glass, and concrete blocks.

This results in layered works of paper and glass in which Russell Maltz composes color and the material of the support, such as “Ballpark XXXS”, which the New York artist realized at the Württembergischer Kunstverein Stuttgart in 2002, and “Sunbeam Splay / Transfer” (2005) for the McDonough Museum in Youngstown, Ohio.

Russell Maltz (b. 1952, Brooklyn, NY) has exhibited work in solo and group exhibitions internationally, including in Australia, Germany, Austria, Italy, Israel, Mexico and New Zealand. His work is included in many public and private collections worldwide, including The Brooklyn Museum (New York), Yale University Art Gallery (New Haven, CT), Fogg Art Museum/Harvard University Art Museums (Cambridge, MA), Museum Moderner Kunst (Ottendorf, Germany), and the Gallery of Western Australia (Perth, Australia). His work has been reviewed in publications such as The New York Times, Artforum, Art in America, and Village Voice, among many others. 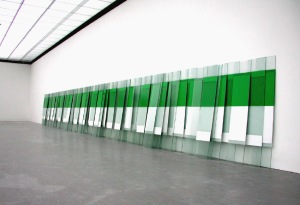 The term Construction Art was first used as a derisive term by Kazimir Malevich to describe the work of Alexander Rodchenko in 1917. Constructivism first appears as a positive term in Naum Gabo‘s Realistic Manifesto of 1920. Aleksei Gan used the word as the title of his book Constructivism, printed in 1922.[1] Constructivism was a post-World War I development of Russian Futurism, and particularly of the ‘counter reliefs’ of Vladimir Tatlin, which had been exhibited in 1915. The term itself would be invented by the sculptors Antoine Pevsner and Naum Gabo, who developed an industrial, angular style of work, while its geometric abstraction owed something to the Suprematism of Kazimir Malevich. 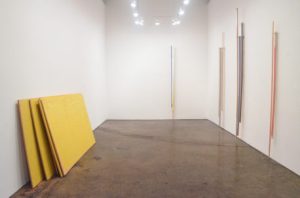 Constructivism as theory and practice was derived largely from a series of debates at the Institute of Artistic Culture (INKhUK) in Moscow, from 1920–22. After deposing its first chairman, Wassily Kandinsky, for his ‘mysticism’, The First Working Group of Constructivists (including Liubov Popova,Alexander Vesnin, Rodchenko, Varvara Stepanova, and the theorists Aleksei Gan, Boris Arvatov and Osip Brik) would develop a definition of Constructivism as the combination of faktura: the particular material properties of an object, and tektonika, its spatial presence. Initially the Constructivists worked on three-dimensional constructions as a means of participating in industry: the OBMOKhU (Society of Young Artists) exhibition showed these three dimensional compositions, by Rodchenko, Stepanova, Karl Ioganson and the Stenberg brothers. Later the definition would be extended to designs for two-dimensional works such as books or posters, with montage and factography becoming important concepts..