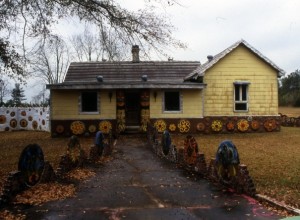 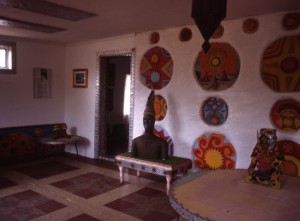 Pasaquan lavishly fuses African, pre-Columbian Mexico and Native American cultural and religious symbols and designs, along with motifs inspired by Edward Churchward’s books about “The Lost Continent of MU.”

Eddie Owens Martin, the son of poor white sharecroppers, created an elaborate new religion and world called Pasaquan in western Georgia’s pine country. At 14 he ran away from his abusive father, landing in New York City where he survived as a street hustler, dope dealer, and fortune-teller. During an illness in the 1930s a voice from the “spirit world” told him he was going to become a “Pasaquoyan” named Saint EOM (the E is silent, pronounced like the eastern chant OM). He later defined this term as a fusion of Spanish and “Oriental” words that illustrated a merging of past and future. He became Pasaquoyan’s sole priest and practitioner.

St. EOM permanently returned to Georgia in 1957, moving into the family home and four acres he inherited. He continued telling fortunes, and began to ornament his home and grounds. Despite no real construction experience, he had learned basic skills growing up on the farm. He built and then embellished fences, temples, pagodas, shrines, walls, and walkways with brightly-painted oversized cement-sculpted totem faces, whirling mandalas, giant undulating snakes, and variously styled nude figures, influenced by his concepts of the temple complexes of pre-Columbian Mexico and the fabled lost continents of Mu and Atlantis. The imagery, also vaguely reminiscent of Pacific Islander sculpture and aboriginal painting, was stylistically adapted to the flashy designs and gaudy colors of a carnival sideshow. 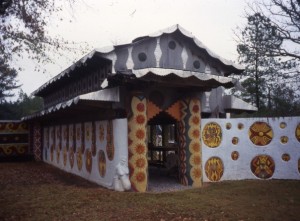 Martin’s extensive ceremonial wardrobe included flamboyant multi-colored robes and capes, turbans, feathered headdresses, and elaborate homemade jewelry. He never trimmed his hair or beard, binding them up on top of his head into braids starched with rice paste and decorated with jewels. At over six feet tall, his performances of “ritual” dances in full regalia were singularly impressive.

Depressed, aging, and ill by the mid-1980s, St. EOM shot himself in 1986. “I built this place to have somethin’ to identify with,” he said,” `cause ther’s nothin’ I see in this society that I identify with or desire to emulate. Here I can be in my own world…. I wanna prove to society that even though I’ve been ostracized all my life, I have good qualities and good potential. I built this place just to prove that I could do it.” In 2008 Pasaquan was added to the National Register of Historic Places and is maintained by the nonprofit Pasaquan Preservation Society.