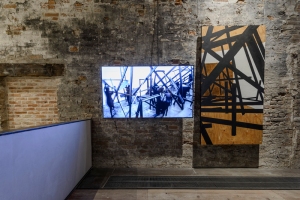 Nitegeka was born in Burundi in 1983 and lives in Johannesburg.

In addition to five solo shows at Stevenson Johannesburg and Cape Town, Nitegeka has exhibited at Marianne Boesky Gallery and Boesky East in New York, in 2016 and 2014; SCAD Museum of Art, Savannah, Georgia (2015); and Le Manège gallery, French Institute, Dakar in 2012. Group exhibitions include Solidary & Solitary at the Ogden Museum of Southern Art (2017); Exchange at Galerie Hans Mayer in Düsseldorf (2016); I Love You Sugar Kane at the Institute of Contemporary Art Indian Ocean in Port Louis, Mauritius (2016); A story within a story…, at the 8th Göteborg International Biennial for Contemporary Art (2015); What remains is tomorrow at the South African Pavilion at the 56th Venice Biennale (2015); Venturing Out of the Heart of Darkness at The Harvey B Gantt Center for African-American Arts and Culture in Charlotte, North Carolina (2015); This House, part of Nouvelles vagues at the Palais de Tokyo, Paris (2013); My Joburg at La Maison Rouge, Paris and the Staatliche Kunstsammlungen Dresden (2013) and The Space Between Us at ifa Galleries in Berlin in 2013.

He won the Tollman Award for the Visual Arts in 2010, and in the same year he was selected for the Dakar Biennale, where he won a Fondation Jean Paul Blachère prize. 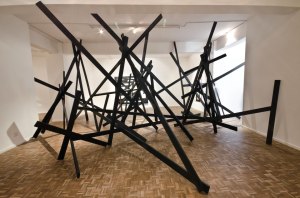 Serge Alain Nitegeka’s practice comprises abstract painting, sculpture, large-scale installation, and figurative drawing, repurposing modernist preoccupations with line and the picture plane to address larger cultural and political issues. Nitegeka’s work has been shown throughout South Africa, Senegal, Europe, and the United States. His first solo exhibition at Marianne Boesky Gallery, Morphings in BLACK, opened in November 2014 at the gallery’s Lower East Side location. In 2015, Nitegeka’s work appeared in the South African Pavilion at the 56th International Art Exhibition of the Venice Biennale, as well as at the Göteborg International Biennial of Contemporary Art, Gothenburg, Sweden. In spring 2015, he presented his largest site- specific installation to date, Structural Response II, at SCAD Museum of Art, Savannah, GA. In 2016, Nitegeka presented his second solo exhibition at Marianne Boesky Gallery, titled Colour & Form in BLACK. In 2017, his work was included in numerous group exhibitions, including Solidary and Solitary: The Joyner/Giuffrida Collection which will travel to institutions such as the Baltimore Museum of Art, Berkeley Art Museum and Pacific Film Archive at University of California, Nasher Museum of Art at Duke University, and the Pérez Art Museum Miami.