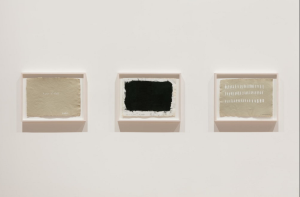 Martos Gallery presented A Year of Firsts, the gallery’s first solo exhibition with The Estate of Kathleen White. White’s practice was in many ways about “the story of a gift.” Before passing away in 2014, much of her work was in response to her love for the family of friends she surrounded herself with; a kind of aesthetics of care.

These intimate narratives take the form of drawing, painting, sculpture, and performance. Never simply an outside observer, White used her love for others as well as her own reality—happiness, grief, love, sadness—to expose other people to something beautiful. Tragedy and loss became ever-present in White’s life. The title work of this exhibition, A Year of Firsts, 2001, is an installation of 40 works on paper that circles the entire gallery. It can be read like a book, or more accurately a diary and unique system of language, as it takes you through White’s year after; year after her father’s death, her brother’s death, her sister’s death, and the many friends that were lost to AIDS. Anchoring the gallery entrance are two small cars made of Sculptamold and oil paint. White made hundreds of these cars, in different sizes and colors. They were, for White, vessels for fantasy, adventures, good and bad fortune. The final 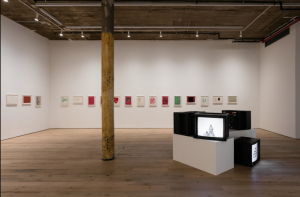 component is a performance The Spark Between L And D, 1988, which plays on four screens in the middle of the gallery. Wearing a nurse’s uniform covered with flags from around the world, White first beats herself up then licks the blood off of her fingers before bandaging herself up, almost mummy-like, the whole time singing “On Broadway” until she is so bound, she can no longer make a sound.

Pioneer Works is very pleased to present Kathleen White: Spirits of Manhattan and Nan Goldin: Kathleen, two separate but interconnected exhibitions revolving around White and Goldin; formidable colleagues, they were mutually affected by the AIDS crisis then unfolding in the 1980s and 90s, in real-time. A story of friendship and survival, these exhibitions mark the first time extensive presentations of White and Goldin’s work have been shown together, and are held in conjunction with an exhibition of White’s work at Martos Gallery.

Goldin photographed White continually during the 1990s, and the prints featured in Nan Goldin: Kathleen—some printed here for the first time—are not posed. Rather, in part they reflect the reality of haunting, unending loss affecting the two artists’ personal lives, at a time when White and Goldin’s shared downtown community of artists, writers, and performers were dying of AIDS in quick succession. In other ways they’re celebratory—of the joys of being alive, in all its difficulty, at a time when life seemed in short supply. Goldin first featured her and White’s extended network of artists and activists responding to the epidemic in a landmark, 1989 exhibition she curated at Artists Space,Witnesses: Against Our Vanishing. A decade later, Goldin returned to Artists Space to curate Shy, which featured works by friends who were her photographic subjects, as well as artists in their own right. The exhibition featured White’s large installation Spirits of Manhattan(1996), made primarily of human hair. At the time, many of the city’s drag performers were dying of AIDS. With no one to claim their possessions, their personal belongings, including wigs, were left on the street. White worked closely within this scene, so it hit close to home. They could’ve been her friends.

Though primarily a painter, White began to use the strewn hair as material. Before long, performer friends like Lady Bunny, Jojo Americo, Billy Erb, David Dalrymple, and numerous others were contributing wigs for the project. These reconfigured wigs, hair slicks and bobs comprise the bulk of Kathleen White: Spirits of Manhattan. Aside from that work, which gives the exhibition its name, also included are New York City phone book pages, hand altered with markings, watercolor, burn marks, and more hair, that function something like a compendium of White and Goldin’s social network at the time. The hair in both of White’s series equally resembles knots, tendrils, and hearts, the latter a recurring motif of White’s. This is particularly poignant, considering her life was so marked by tragedy and loss. She herself died of cancer in 2014. These exhibitions mark something of a posthumous return to White’s work, which, like Goldin’s, was so impacted by the people around her.

The exhibitions at Pioneer Works are curated by David Everitt Howe, Pioneer Works’ Curator, in conversation with Rafael Sánchez, on behalf of The Estate of Kathleen White and the 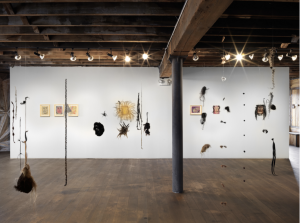 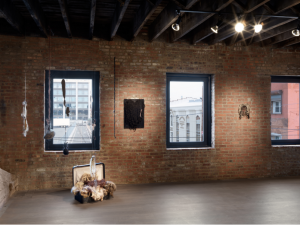