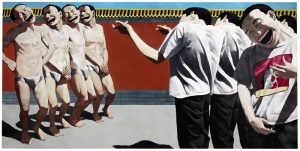 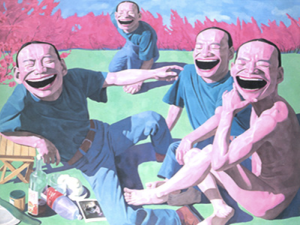 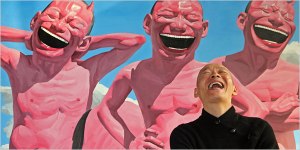 I want the audience not to think of one thing or one place or one event. The whole world’s the background. As I said, the viewer should not link this painting to Tiananmen. But Tiananmen is the catalyst for conceiving of this painting — Artist response to his work Execution

Yue Minjun was born in 1962 in the town of Daqing in Heilongjiang, China. Yue Minjun’ family was working on an oilfield when he was young, also he taught art in oil school for a short time. In 1980, he graduated from high school, after that he went to Tian Jing National Company. In 1983, he decided to go to He Pei. He became an electrician in He Pei. He was painting and working at the same time. Normally he could both continue painting and working for 20 days. This life experience gives us a trail of why the skin color from his work is red. In the 1980s, he started painting portraits of his co-workers and the sea while he was engaged in deep-sea oil drilling. In 1989, he was inspired by a painting by Geng Jianyi at an art show in Beijing, which depicted Geng’s own laughing face. In 1990, he eventually moved to Hongmiao in the Chaoyang District, Beijing, which was also home to other Chinese artists. During this period, his style of art developed out of portraits of his bohemian friends from the artists’ village. It is important to note that Yue had been living a “nomadic” existence for much of his life, because his family often moved in order to find work on various oilfields. Labeled by critics as a very influential member of the Cynical Realism movement he found success and praise for his signature images in a variety of including sculpture, water color, and print. Affected by Chinese modern art revolution, the whole country was breaking down old thoughts and doing something new. This is also really important for Yue and he said he was grew up in such a closed world, the military families give him a protected feeling, but everything happened during that time totally changed his thoughts.

Cynical realism is a contemporary movement in Chinese art, especially in the form of painting, that began in the 1990s. Beginning in Beijing, it has become one of the most popular Chinese contemporary art movements in mainland China. It arose through the pursuit of individual expression by Chinese artists who broke away from the collective mindset that existed since the Cultural Revolution. The major themes tend to focus on socio-political issues and events since Revolutionary China (1911) to the present. These include having a usually humorous and post-ironic take on a realist perspective and interpretation of the transition that Chinese society has been through, from the advent of Communism to today’s industrialization and modernization.

Karen Smith, a Beijing expert on Chinese art, suggests that Mr. Yue’s grin is a mask for real feelings of helplessness. “In China there’s a long history of the smile,” Mr. Yue said. “There is the Maitreya Buddha who can tell the future and whose facial expression is a laugh. Normally there’s an inscription saying that you should be optimistic and laugh in the face of reality.” 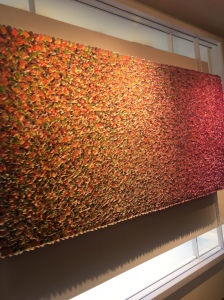 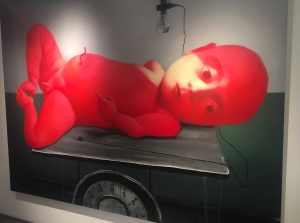 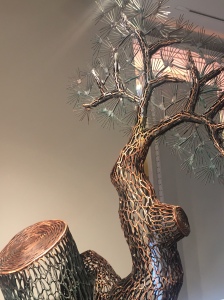 According to Gilles Dyan, Chairman of Opera Gallery, “Made in Asia is an exhibition that embodies the spirit of Opera Gallery: the determination to bridge cultural and aesthetic gaps through accessibility and excellence for the benefit of the new and established art collector. We are delighted to be able to bring these works together in celebration of Asia Week New York.”

Founded by Gilles Dyan in 1994 and now internationally established with 12 galleries and locations worldwide, Opera Gallery is one of the leading dealers in modern and contemporary European, American and Asian art, placing works in major private collections as well as leading public institutions.