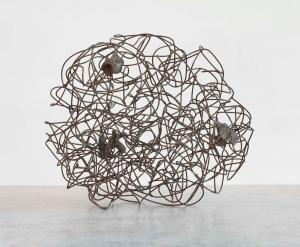 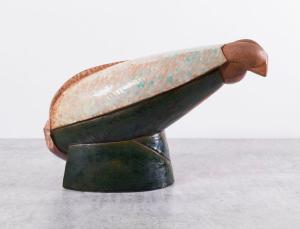 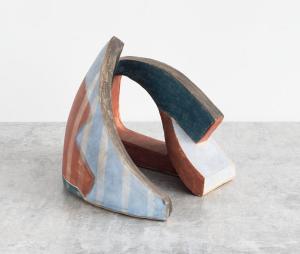 Claire Falkenstein: Matter in Motion, is a survey that will feature significant examples from the prolific oeuvre of Claire Falkenstein (American, 1908-1997). Celebrated for her exquisite structures of fused metal and glass, the exhibition will also include works in a range of media, from early ceramic and wood sculptures to seminal explorations in metal to dynamic paintings and works on paper. The exhibition, Falkenstein’s second large-scale solo show at Michael Rosenfeld Gallery, will be accompanied by a fully-illustrated color catalogue, featuring a reprint of an Archives of American Art oral history interview conducted between the artist and Paul Karlstrom in 1995. The exhibition will be on view simultaneously with Claire Falkenstein: Time Elements at the University of Buffalo Art Galleries (May 6-July 29, 2018), an institution that preserves the legacy of gallerist Martha Jackson who championed and represented Falkenstein in the 1960s.

Claire Falkenstein: Matter in Motion takes its title from one of the guiding principles of Falkenstein’s work, which she explained in an artist’s statement she wrote in 1957 for an exhibition at Galerie Stadler, in Paris. The “quasi-science” thread that connects Falkenstein’s work in an array of different materials stems from such influences as Albert Einstein’s theory of relativity and an interest in physics, mathematics, and the expanding universe. These notions embodied her constantly evolving ideas of motion and structure that define her work. The exhibition will encompass the breadth of these explorations, categorized within one or more of five fundamental systems that outline her methodologies:  1. the lattice structure (a network of welded intersections much like a tissue composed of cells); 2. the sign (a modular abstract element that could be continuously multiplied into a “set” and then again into an “ensemble” – or the resulting structure or sculpture); 3. the screen structure (a two-dimensional element related to “the sign” and “set structure” extended, theoretically, ad infinitum – representing space itself); 4. the truss structure (the “Never Ending Screen” in three-dimensional form); and 5. the topological structure (metal structures related to a series of Suns which fuse interior and exterior, alternately contracting and expanding and simultaneously occupying and creating space). These theories were illustrated in sketches – “structures drawings” – that Falkenstein used to define the underlying components of her work and her philosophical approach to science that was the basis of her aesthetic concerns.

Claire Falkenstein (1908-1997) was born in Coos Bay, a small Pacific lumber town in Oregon. She began sculpting as a child, but did not intend to study art when she entered the University of California Berkeley in 1927. However, it soon became her passion, and in 1930 she graduated with a major in art and minors in philosophy and anthropology. That same year, the East-West Gallery in San Francisco mounted her first solo exhibition, a rare achievement for such a young artist. In 1933, Falkenstein received a grant to study at Mills College in Oakland with Alexander Archipenko, who introduced the principles of implied motion and spatial relationships in abstract sculpture. During her studies at Mills, she also worked with Bauhaus émigrés László Moholy-Nagy and Gyorgy Kepes.

By 1940, Falkenstein was living in San Francisco and working predominantly in wood and ceramics, creating abstract, organic three-dimensional forms with moveable parts. Her work was first shown in New York City in 1944, when the Bonestell Gallery mounted a solo exhibition. In the late 1940s, she began teaching at the California School of Fine Arts, where she met Clyfford Still, whose abstract expressionist paintings had an important influence on her approach to sculpture, and she began to allow more room for the accidental and the spontaneous. Falkenstein’s 1948 exhibition at the San Francisco Museum of Art demonstrated her move towards a freer, open-form language. 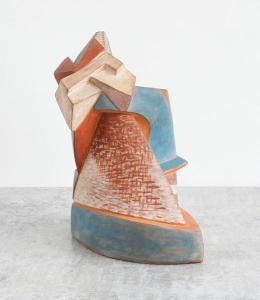 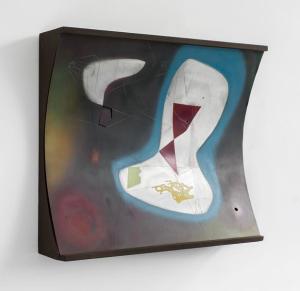 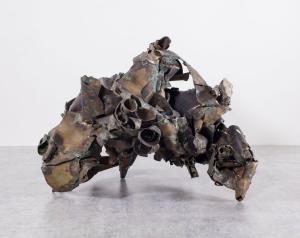 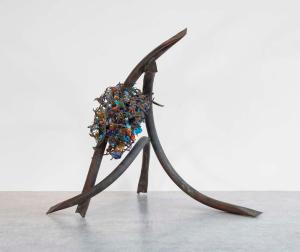 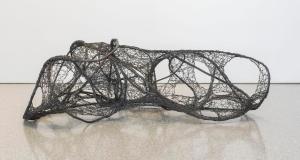 Falkenstein moved to Paris in 1950, where her friends included American artists Sam Francis, Paul Jenkins, and Mark Tobey. A versatile and innovative artist, Falkenstein spent most of her career unaffiliated with specific art movements, and she attributes her confidence in this individuality partly to her time in Paris, explaining, “the French allowed a kind of individual action. They have the quality of centuries . . . of culture and of art and . . . [y]ou feel it within yourself when you’re there. I felt it so strongly that right away my so-called ‘looking within’ really worked. That’s when I developed my own vocabulary.” In Europe, she created some of her most important works, such as the Sun Series, sculptures of welded wire that revealed her fascination with the sculptural qualities of open and negative space. Her work was exhibited extensively, and she became the only non-German artist included in the 1952 Werkbund exhibition, revived for the first time since its suppression under Hitler.

Falkenstein returned to the United States in 1960 and settled in Southern California. Represented by Galerie Stadler in Paris and the Martha Jackson Gallery in New York, she completed numerous public commissions around the world including the gates of the Palazzo Venier dei Leoni in Venice (now the Peggy Guggenheim Collection, Venice, Italy). Her first public commission in Los Angeles (1963-1965) was a welded copper tube and glass fountain for the California Federal Savings and Loan Association. Known as the Cal Fed Fountain, the work used water as a sculptural element integral to the overall composition. This work forced Falkenstein to think in terms of the construction and flow of sculpture, revealing her recurring interest in molecular structure, topology, and cosmology. The most monumental commission of her career was a series of welded doors and glass windows for St. Basil Church in Los Angeles. Completed in 1969, this series revolved around her notion of the “never ending screen,” a sculptural element she developed and deployed throughout her career, even incorporating it into paintings and drawings.

A prolific artist, Falkenstein continued to work and exhibit for the duration of her nearly seventy-year career. In 1997, she died at age eighty-nine, and soon after, The Falkenstein Foundation was created to preserve her legacy. Since then, her work has been shown regularly in group and solo exhibitions, including the 2015 exhibition Pathmakers: Women in Art, Craft & Design, Midcentury and Today at the Museum of Arts and Design in New York and the National Museum of Women in the Arts in Washington, DC. In 2016, the Peggy Guggenheim Collection in Venice mounted Postwar Era: A Recent

History, Homage to Claire Falkenstein and the Pasadena Museum of California Art organized the traveling retrospective Beyond Sculpture, comprised of approximately seventy-five works. That same year, Michael Rosenfeld Gallery mounted a solo exhibition focused on a selection of Falkenstein’s work from the years 1955 to 1975 and she was also included in the group exhibition Impact: The Legacy of the Women’s Caucus for Art at the American University Museum of the Katzen Arts Center at American University in Washington, DC. Most recently, her work was featured alongside masterpieces of the 20th century in Visionaries: Creating a Modern Guggenheim at the Solomon R. Guggenheim Museum in New York. In 2018, in addition to the exhibition at UB Art Galleries in Buffalo, Falkenstein’s work will be included in such international exhibitions as On the Edge: Art in Western Europe, 1948-1956 at the Musée d’Art Moderne de la Ville de Paris in Paris, France and Loved, Lost and Loose: Foreign Artists in Paris 1944-1968 at the Museo Nacional Centro de Arte Reina Sofía in Madrid, Spain. 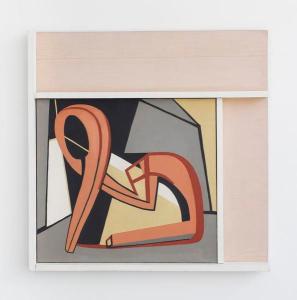 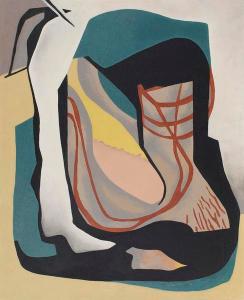