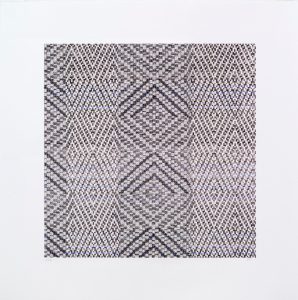 Flowers Gallery is presenting a group exhibition of work by five artists, bound by their use of experimentation in devising rules to generate algorithmic form. The exhibition focuses on works created by a process analogous to the principles and practice of mathematics to generate patterns, rhythms and relationships through rules or systems with their own aesthetic and origin.

In his seminal 1949 essay, “The Mathematical Way of Thinking in the Art of our Time”, Max Bill upheld that elementary mathematical patterns were embedded in the cosmos, underlying all human order and were present in all the structures that we recognized.  He said, “The art presents the overall view of the world that we have today. The art does not depict nature, but rather creates new systems that make visible the underlying patterns.” As a continuation of this line of inquiry, the present exhibition draws together works in which rhythms, patterns and structures are derived from the chaos of the surrounding world, to reveal or determine an underlying sense of order.

The exhibition’s title yes no maybe is a reference to Bayes’ Theorem (the mathematical theory of probability), which was first published by the Reverend Thomas Bayes in 1763. The theorem defined a rule for refining a hypothesis by factoring in additional evidence and background information, leading to a number representing the degree of probability that the hypothesis is true. In an era in which ‘post-truth’ is becoming one of the defining words of our time, in which objective facts have become unimportant or irrelevant, this exhibition examines the work of five artists whose methodology is grounded in the incorporation and adherence to a given information system and structure.

A pioneer of Optical Art, Michael Kidner devoted much of his career to developing work of a constructive nature. Both rational and playful, his art has combined visual responses to the principles of mathematics, science and chaos theories with an abiding interest in the irrational and unpredictable nature of the human condition. Love is a Virus From Outer Space represents Kidner’s fascination with patterns that appear to fluctuate between order and disorder, using the irregular pentagon as the basic structure to tile the plane of the painted surface. Kidner draws on the instability of the geometric structure to introduce an element of chaos, considering the pentagon an ideal metaphor for both space and uncertainty. The cellular-like composition of the image (and its playful title) also implies reference to the hidden structures of the natural world, such as organic forms seen through the lens of a microscope, which shape not only the construction of the visible world but also the basis of human behavior.

Staircase is the first video piece from a larger body of work, in which Judith Stenneken explores ideas around displacement and adaptability, using video, photography as well as interaction. Stenneken sets the stage in Germany’s historical airport Berlin Tempelhof (THF), which was closed in 2008 and subsequently partially converted and reopened as a refugee camp in 2015, when the German government accepted one million refugees – many of whom were fleeing the war in Syria.

In Staircase Stenneken has created a dialogue with ideas from philosopher Vilém Flusser and cognitive scientist Douglas R. Hofstadter, using their ideas as a framework to explore the emergence of meaning through repetitive motion.  In his essay ‘Exile and Creativity’ from 1984 Flusser compares exile to “an ocean of chaotic information”, through which one must process or transform the data in creative ways in order to survive. In his bestseller ‘Gödel, Escher, Bach – An Eternal Golden Braid’ from 1979 Hofstadter too explores the possibility that for meaning to take shape it requires repetitive patterns such as ‘strange loops’, finding examples for his thinking in the works of mathematician Gödel, the drawings of Escher and Bach’s fugues. Stenneken suggests that the interplay of repetition and meaning is also true for us today, as we experience the challenges of the digital revolution. She draws a parallel to those who seek refuge away from home and are forced to adapt to another society, language and culture. Stenneken argues we are all expellees as we move from the physical world into the virtual realm, questioning not only how we will survive the shift, but what the values of the new information age will be.

From the mid 1960s onwards, Jack Smith created a wholly original abstract pictorial language, which was often compared to musical notation. His system of signs represented, in semiotic terms, an equivalent form for interval, silence, speech and speed. Smith was influenced by ground breaking composers John Cage, Erik Satie and Anton Friedrich Wilhelm, responding in particular to the areas of silence in their compositions in his depictions of silence and light. Smith considers the paintings “diagrams of an experience or sensation: the sound of the subject, its noise or its silence, its intervals and its activity…”, stating, “The closer the painting is to a diagram or graph, the nearer it is to my intention.” The confluences of shape and line in paintings such as Balancing and Touching 3, or Floating. Six Elements, generate equivalents for ideas, sensations and physical experiences, with a sense of weightlessness created by their economy of marks.

Throughout her practice, Beryl Korot has brought the ancient and modern worlds of technology into conversation. An early figure in the history of video art, Korot was first known for her multiple channel video work in which she applied specific structures inherent to loom programming to the programming of multiple channels, constructing non-verbal narratives. The sources for much of her work reach back to the technology of the ancient world, whether the technology of the loom or of writing itself. In her work, there is both the visualization of an interior landscape based on language and a spotlight on the intersection between technology and thought. Korot has described threads (whether wool, linen, or magnetic tape) as having been both metaphor and medium throughout her practice, and the technology that conveys them a clue to structure.

The two works in the present exhibition (titled Weaver’s Notation – Variation 1, and Weaver’s Notation – Variation 2), are part of a series of works that explore the patterns derived from Korot’s landmark 1977 video installation Text and Commentary. Generating a new layer of dialogue using contemporary technological vocabulary, this body of work incorporates digital methods of embroidery in which the image proceeds to be similarly constructed line by line, or thread by thread.

Influenced by his experience as a jazz musician and by German philosopher Max Bense’s theories on rational aesthetics, Manfred Mohr has been an innovator in the field of computer-generated art. Co-founder of the “Art et Informatique” seminar in 1968 at Vincennes University in Paris, he discovered Professor Max Bense’s writing on information aesthetics in the early 1960s. These texts radically changed Mohr’s artistic thinking, and within a few years, his art transformed from abstract expressionism to computer-generated algorithmic geometry. Encouraged by the computer music composer Pierre Barbaud, whom he met in 1967, Mohr programmed his first computer drawings in 1969.

Since 1973, Mohr’s works have been based on the logical structure of cubes and hypercubes—including the lines, planes, and relationships among them. P1411-I, 2010 is from a body of paintings and animations titled ParallelResonance produced between 2009-2011, based on the 11-dimensional hypercube, using diagonal paths as a compositional building block. Diagonal paths are all the combinatorial possibilities of connecting two opposite points through a hypercube network, passing through each dimension once. In this period of work, tension fields of color are contained by expanded black and white lines that describe the hypercube form.