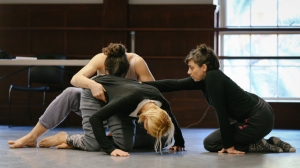 A quadrille is an 18th century dance performed in a rectangular configuration and viewed from four sides. The Joyce 2018 – 19 season opens in SEPTEMBER with the return of the NY Quadrille, which transforms the Joyce stage into a large platform that allows audiences to view cutting-edge work from one of four different sides. Designed, curated, and conceived by renowned choreographer Lar Lubovitch, this year’s program will feature five companies over the course of three weeks.

The mission of A.I.M is to create an evocative interdisciplinary body of work. Born into hip-hop culture in the late 1970s and grounded in Abraham’s artistic upbringing in classical cello, piano, and the visual arts, the goal of the movement is to delve into identity in relation to a personal history. The work entwines a sensual and provocative vocabulary with a strong emphasis on sound, human behavior and all things visual in an effort to create an avenue for personal investigation and exposing that on stage. A.I.M. is a representation of dancers from various disciplines and diverse personal backgrounds. Combined together, these individualities create movement that is manipulated and molded into something fresh and unique.

Rashaun Mitchell is a choreographer, performer and teacher living and working in NYC. He is a 2014 Guggenheim Fellow and recipient of the 2012 New York Dance and Performance (“Bessie”) Award for Outstanding Emerging Choreographer. His work focuses on the creation of new vocabularies for dance performance, with a particular interest in creating polymodal dance in response to complex and active spatial environments. It takes into account its surroundings as a vehicle for communicating particular metaphorical, intertextual, and sense-based aspects of dance and performance. His choreography has been presented by MoMA PS1, New York Live Arts, Danspace Project, Baryshnikov Arts Center, REDCAT, Institute of Contemporary Art Boston and Summer Stages Dance, Lower Manhattan Cultural Council, La Mama Moves Festival, Mount Tremper Arts, Skirball Center at NYU, the Museum of Arts and Design, and at numerous site-specific venues and universities.

Beth Gill is an emerging choreographer who makes contemporary dance and performance in New York City. She has accumulated a body of work that critically examines issues relating to the fields of contemporary dance and performance studies, through a focused exploration of aesthetics and perception. Ranging from short-term improvised structures to long-term choreographed performances, her work has been commissioned by The Chocolate Factory Theater, The Kitchen, Dance Theater Workshop and New York Live Arts as well as performed internationally.

Beth is a graduate of New York University’s Tisch School of the Arts and has been a guest artist at Barnard College, Eugene Lang College the New School for Liberal Arts and Arizona State University.

Since it’s founding in 1990, the New York City-based Donna Uchizono Company has performed before enthusiastic audiences across the United States and throughout Europe and South America.

Artistic director and choreographer, Donna Uchizono, is a widely respected and award-winning artist who has been inventing dances of unique vocabulary and presenting them to the public for nearly 20 years. Her exceptional dedication to her Company and to her art has been rewarded with worldwide recognition and acclaim, including a Guggenheim Fellowship and grants from the National Endowment for the Arts, the Harkness Foundation for Dance, the Rockefeller Foundation, and many others. Among her recent awards is a 2002 “Bessie” – the New York Dance and Performance Award – for her work Low. 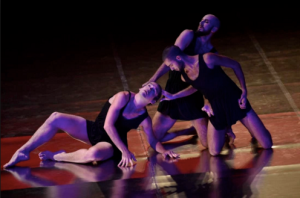