Red Grooms is an American artist known for his painted-collage sculptures of both fictional and observed scenes. Characterized by his distinctive stylization and humor, Grooms created his hallmark works with illustration board and a hot glue gun, painstakingly piecing together painted depictions into a believable physical space. Born on June 7, 1937 in Nashville, TN, he went on to study at the Art Institute of Chicago, moving to New York in 1956. There, Grooms befriended and exhibited with artists associated with the Pop Art movement, such as Alex Katz, Jim Dine, and Claes Oldenburg. Grooms is recognized as a forerunner of sculptural installation art, and his work can be found in the collections of The Museum of Modern Art in New York, the Art Institute of Chicago, and the Carnegie Museum of Art in Pittsburgh, among others. Grooms lives and works in New York, N.Y. 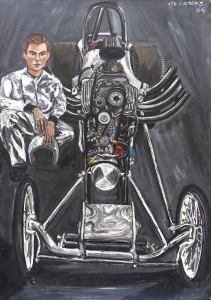 Marlborough Contemporary presented over 60 years of paintings, drawings, and sculptures by Red Grooms. Though best known for his immersive installations, this exhibition focuses on Grooms’ more intimate, though equally wide-ranging work in drawing, painting, and sculpture and reveals him to be a one-man movement whose vision of art and culture is broad, democratic, and joyous. Grooms absorbed the artistic zeitgeist — the art brut and surrealist aesthetics of Chicago, the ab-ex mayhem of New York, and the bohemian paradise of Provincetown. Grooms played a crucial role in late 1950s downtown Manhattan, developing what became known as “Happenings” (here represented by Grooms’ 1970 diorama of his own Burning Building performance) and co-founding two loft galleries, where he exhibited friends and peers including Bob Thompson, Claes OIdenburg, Jim Dine, and Marcia Marcus. These years are chronicled in the artist’s early drawings and paintings, each a self-contained work of expressive mark making, observation, humor, and all-out fantasy influenced by artists such as Lester Johnson and Fairfield Porter, and the cartoonist Bill Holman. These works exist, as Grooms himself did, just at the intersection of the abstract 1950s and the pop 1960s, and document the artist finding his voice and community. Among these works is Grooms’ acrylic-on-bedsheet advertisement for his 1962 film with Rudy Burckhardt (also the subject of a sculpture and drawing here), Shoot the Moon, which was screened in the gallery.

Dan Nadel was born in Washington D.C. in 1976. He is the founder of PictureBox, a Grammy Award-winning publishing company that produced books and projects from 2000 to 2014. Dan has authored books including The Collected Hairy Who Publications, Art Out of Time: Unknown Comic Visionaries, 1900-1969, Gary Panter, Art in Time: Unknown Comic Book Adventures, 1940-1980, and co-authored (with Norman Hathaway) Electrical Banana: Masters of Psychedelic Art, and Dorothy and Otis: Designing the American Dream. Dan was the co-editor of The Comics Journal from 2011 through 2017, and has published essays and criticism in Art in America, the New York Review of Books, and Artforum. As a curator, he has mounted exhibitions including: “What Nerve! Alternative Figures in American Art: 1960 to the Present” in Providence and New York, “Victor Moscoso: Psychedelic Drawings, 1967-1982” in New York, “Return of the Repressed: Destroy All Monsters 1973-1977” in Los Angeles; “Karl Wirsum: Drawings 1967-1970” in New York; Suellen Rocca: Bare Shouldered Beauty in New York; the first major Jack Kirby retrospective, “The House that Jack Built” in Lucerne, Switzerland; “Macronauts” for the Athens 2007 Biennale in Greece; Jeremy Anderson: “Taking the World Apart is Easy, It is Getting it Back Together in an Acceptable Form That is Difficult” in Los Angeles; and The Passing of Time: Michael Hurson at Work, 1971-2001 in New York.