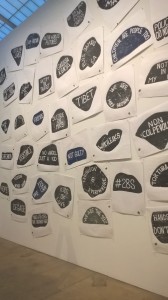 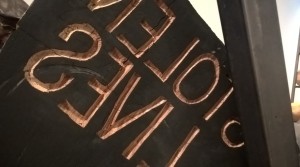 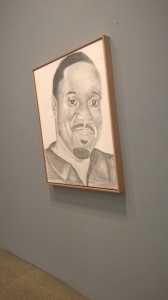 Galerie Lelong & Co. is presenting Urban Requiem, Barthélémy Toguo’s first exhibition at the gallery and first solo exhibition in New York in a decade. The artist will be present for the opening reception.

A Cameroonian artist based in France, Toguo focuses his multimedia practice on notions of exile and belonging. Urban Requiem (2015) presents an arrangement of ladders weighed down with wooden portrait busts. Carved into their flat bases are slogans sourced from recent protests and national movements, from #MeToo to #BlackLivesMatter, allowing each sculpture to function as a stamp. The process of utilizing each stamp parodies administrative gestures, as they require significant effort to lift and coat with black ink before making a thickly crusted mark on paper.

Toguo first conceived of the idea in the 1990s, after noticing that his passport was filled with stamps from various customs agents around the world, unlike those of his colleagues who resided in the European Union. These markings—or brandings—spark a larger conversation on the language of authority, border control as a mode of policing, and the flow of human bodies and capital that is inescapably tied to colonial and imperial histories. 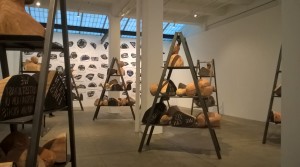 Toguo reminds us that human life has always been the highest price paid for the warring of ideas. By definition, “requiem” suggests an act of mourning for the dead, but Urban Requiem prompts us to ask, who or what has died? A piece of the answer is revealed in Black Lives Matter, a series of drawings from last year showing victims of police shootings, with each subject identified by name: Walter Scott, Trayvon Martin, Philando Castile, and Rekia Boyd. Each portrait both memorializes an individual life lost and serves as monument to countless victims of multigenerational anti-black violence.

By contrast, Toguo’s striking paintings present more abstract renderings of plant life that bleed into human figures, binding societal issues to the ecological. Toguo says, “My formal proposals, my ethical approach, my aesthetic vocabulary converge in the long run to go to the Other, the Others, with empathy.”

Toguo was born in M’Balmayo, Cameroon, in 1967, and currently lives and works in Paris, France and Bandjoun, Cameroon. Represented by the Paris location of the gallery since 2010, Toguo’s relationship with the gallery extended to New York in 2019. Coinciding with Urban Requiem at Galerie Lelong & Co. is Perilous Bodies (March 5 – May 11, 2019), a group exhibition that will inaugurate the newly renovated Ford Foundation Center for Social Justice, New York. Curated by Jaishri Abichandani and Natasha Becker, the show will feature Toguo’s installation, Road to Exile(2009). His most notable recent solo exhibitions include Exil, International Museum of the Red Cross and Red Crescent, Geneva, Switzerland (2018) and The Beauty of Our Voice, Parrish Art Museum, Water Mill, New York (2018). He was also shortlisted for the 2016 Prix Marcel Duchamp and included in the group exhibition of Prix Marcel Duchamp finalists at the Centre Pompidou, Paris. He has been included in numerous international biennials, including the 56th Venice Biennale (2015); 11th Biennale de Lyon (2011); and Dak’Art Biennale (2010). He was recently featured in Intriguing Uncertainties, The Parkview Museum Singapore travelling to Beijing;Art/Afrique Le Nouvel Atelier, Fondation Louis Vuitton, Paris; and Fragile State, Pinchuk Art Centre, Kiev, Ukraine. In 2011, he was made a Knight of the Order of Arts and Literature in France. His works are included in public collections worldwide, including Tate Modern, England; Centre Pompidou, France; Musée d’art contemporain de Lyon, France; Studio Museum Harlem, New York; and MoMA, New York. 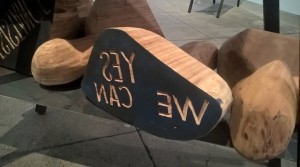 Galerie Lelong & Co. represents prominent contemporary artists and estates from the United States, Latin America, Europe, Asia, and Australia. This uniquely diverse group includes mid-career and established artists at the forefront of the international art world working across all media.

The gallery presents art that challenges viewers on multiple levels and diversifies dominant understandings of modern and contemporary art. While contemporary Latin American art has only recently begun to receive due recognition in the field, the gallery has been a key proponent of the region for decades, representing some of its most vital figures and presenting museum-quality exhibitions of their work. The gallery is proud to have represented Cildo Meireles, the Estate of Ana Mendieta, and Alfredo Jaar for over twenty years as well as the Estate of Hélio Oiticica for over a decade.

Founded in Paris in 1981 by Daniel Lelong, Jacques Dupin, and Jean Frémon, the gallery in New York opened in 1985.  Directed by Mary Sabbatino, Vice President and Partner, the gallery moved to its present ground-floor location in Chelsea in 2001. Galerie Lelong & Co. is a member of the Art Dealers’ Association of America, the most esteemed organization of art galleries in the United States.