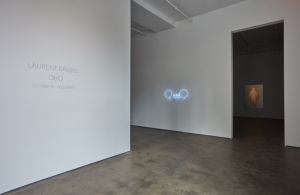 Sean Kelly recently presented OttO, Laurent Grasso’s third solo exhibition with the gallery. Centered around a remarkable film commissioned for the 21st Biennale of Sydney, which will have its US debut at the gallery, the exhibition presents new paintings, video and sculptures related to themes explored in the film. There will be an opening reception on Thursday, October 24, from 6-8pm. The artist will be present.

The eponymous film OttO, Grasso’s most ambitious to date, was shot in November 2017 on four aboriginal sacred sites in the Northern Territory of the Australian desert. When it premiered at the 21st Biennale of Sydney in March 2018, it was an acknowledged highlight of the biennale. OttO was shot in collaboration with the Warlukurlangu Artists Aboriginal Corporation and the community of Yuendumu, its “traditional owners.” Grasso employed thermal and hyperspectral cameras as well as drones in an attempt to capture the electromagnetic radiation being emitted from these remarkable places, assembling a visually stunning story that intertwines fiction, reality, faith and science.

OttO offers spectators an aerial viewpoint on these extraordinarily ancient Australian landscapes following a group of futuristic, floating spheres. For Grasso, these translucent orbs traveling silently across each location represent abstract materializations of secret stories; imagining spiritual “Dreaming” places as vital and conscious forces. This fictional encounter between cutting-edge film technology and a narrative cartography—imperceptible to the non-initiated—proposes a voyage in time marked by immaterial presences, representations of the myths and energies emanating from sacred aboriginal sites.

The title of the film has a dual reference: OttO is the first name of Otto Jungarrayi Sims, the “traditional owner” who granted Grasso access to these sites and whose silhouette appears in the film. Simultaneously, OttO refers to Winfried Otto Schumann (1888–1974), a German physicist who in the 1950s postulated the existence of resonance frequencies in the Earth’s electromagnetic field. These so-called Schumann resonances, which were not technically measured and verified until the 1960s, represent for the artist, the possibility of scientifically transcribing into reality what, for many people, remains an unseen article of faith.

Continuing Grasso’s exploration of new perspectives on the world, the exhibition presents paintings on palladium panels, onyx and marble sculptures, and glowing glass orbs filled with argon gas. Solar Wind is a three-meter-high video-sculpture that makes visual solar activity on the sun, from data provided by four international observatories, in real time. It provides the viewer with an abstract portrait of human apprehension in the face of invisible energy. This presentation of scientific data echoes the recording of the electromagnetic readings presented in OttO and Grasso’s interest in the intersection of science and fiction.

Each work in the exhibition is connected through Grasso’s methodical, scientific, rational approach to his practice, which contemplates the intersection of the material and immaterial worlds. He worked from the idea that an ‘active presence’ could be contained in a territory, following, among others, Eduardo Kohn’s proposal “to step out, for a moment, of our doubt-ridden human housing to open ourselves to those wild living thoughts beyond the human” (How Forests Think, 2013). The exhibition simultaneously engages a diverse range of philosophies spanning the scientific, historical, religious and spiritual. Grasso states, “My work isn’t paranormal or esoteric. Rather, it’s…the work of an observer, with a certain distance. Looking at things as if they could, in the end, become real.”

Concurrent to the exhibition, Laurent Grasso will present “Time Perspective”, a special collaboration with Bernard and Stéphane Clavreuil, exhibiting briefly an exceptional selection of extremely rare books related to the theme of perspective alongside his artworks.

On several occasions, Laurent Grasso has combined his work with other historical or contemporary works, choosing to upend the classic codes of museography to create a particular framework of immersion. He worked with Librairie Clavreuil previously, including for his major retrospective “Uraniborg” in 2012 at Jeu de Paume, Paris. This special project will be on view in the lower gallery from October 25 – 26, 2019.

In addition, he has created numerous public installations, including the permanent and monumental artwork Solar Wind (2016), placed on the Calcia silo’s wall in the suburbs of the 13th arrondissement of Paris, and recently at the Institut de France where he inaugurated a set of onyx sculptures in the inner courtyard.

Currently he is showing a large-scale neon light entitled Visibility is a Trap at the Toronto Biennale.