I am not an artist that thinks about the definition of tradition while making [my art]. We are tradition, we are a part of it. It’s not in the past. We live and continue through it.” – Koichiro Isezaki

Bizen is characterized by significant hardness due to high temperature firing, its earthen-like, reddish-brown color, absence of glaze, although it may contain traces of molten ash resembling glaze, and markings resulting from wood-burning kiln firing.

The clay found in Imbe is sticky and fine (from rice paddy fields), with a high iron content and, traditionally, much organic matter that is unreceptive to glazing.. For some potters this is an inadequate material, since it has weak characteristics such as high shrinkage and relatively low fire resistance. Most Bizen ware is not coated with a glaze because of this shrinkage, since any applied glaze would peel off during the firing process. Due to its low fire resistance it cannot withstand rapid high-temperature changes, so the firing has to be done gradually. However, the soil also has beneficial properties, such as plasticity. The high strength of Inbe clay causes it to retain its form, making it tough even without glaze.

Bizen ware was traditionally produced in and around the village of Imbe in Bizen province, from where it received its name. It is therefore also known as Imbe or Inbe ware. It has ties to Sue pottery from the Heian period in the 6th century, and made its appearance during the Kamakura period of the 14th century.

Bizen was considered one of the Six Ancient Kilns by the scholar Koyama Fujio. It experienced its peak during the Momoyama period of the 16th century. During the Edo period, the Ikeda lords of the Okayama domain continued to support the kilns and gave special privileges to families who operated them, such as the Kimura, Mori, Kaneshige, Oae, Tongu, and Terami. The rustic quality of Bizen made it popular for use in Japanese tea ceremony. Ware of the early phase is called old Bizen style (古備前派 Ko-Bizen-ha). 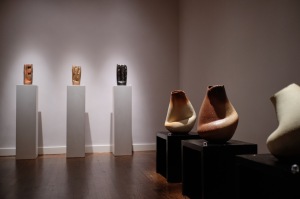 A trailblazer in his family’s history, Koichiro Isezaki carries on his generational ceramics practice of Bizen ware. He is the first son of Living National Treasure Isezaki Jun.

He previously had an apprenticeship with New York-based ceramic artist Jeff Shapiro, who had actually studied under Koichiro’s father’s apprentice Yamashita Jyoji.

An element of chance is inherent within the creation of Bizen ware ceramics, as they involve a glaze produced through natural burning materials inserted in the kiln during the firing process. Isezaki takes this a step further with his straying from traditionality in order to come up with more creative and freer forms via multiple influences outside of his family. In his works, organized chaos and formed formlessness turn themselves on their head in order to produce something akin to his family’s work but with a more modern and textural twist.

He has recently exhibited all over Europe and frequently at Lacoste Gallery in Concord, Massachusetts.